In October 2009 at the age of 82, I was on holiday in Sussex with my son, Clive, and daughter, Lulu, when I experienced very strong tingling in both hands, and the next morning when I got out of bed my left leg was completely numb and useless.

I was taken by ambulance to St. Richard’s hospital, Chichester where at first it was thought I had had a mini stroke. Alas, I was admitted on a Thursday, so it was only on the following Monday (limited hospital staff at the weekends!) when I had a lumbar puncture that Guillain-Barre syndrome was diagnosed. I was given immunoglobulin and set to Southampton Hospital, to the neuro specialist unit. I was there for three weeks where I experienced a very frightening deterioration. I became totally paralysed and doubly incontinent (therefore catheterized), and fed by a tube through my nose (don’t know the medical term). I was luckily not put on a ventilator. the initial shock of all this was dreadful as I had never felt so puzzled and so ill ever before. My son and daughter had a very hard time as they really had no understanding of the illness – they, like most people, had never heard of it. I subsequently transferred to Queen Mary’s on 11th November 2009 where I began to make a slow recovery. I had been told by a neurologist at Southampton that I was in for a long, weary and frustrating journey ahead – maybe 4 to 6 months – and it was up to me to work hard. He explained how the illness could progress: an acute stage followed by a plateau and then, hopefully, the beginning of an upward move towards recovery. My son and daughter were particularly concerned about respiratory problems, as I have pulmonary fibrosis. I cope OK with that but get slightly out of breath and have a coughing fit now and then. It was very hard to believe any cheerful thoughts of total recovery when it was impossible to move one’s big toe but with fantastic nursing, wonderful physios, and the amazing, ever-strong support from family and friends I started on the road to recovery. I was first taken ill on 1st October 2009 and left hospital on the 23rd February 2010. I am at home now walking with one or two sticks, depending how I feel. I am going to hydrotherapy classes every week with my daughter and find this is very helpful. I can’t at the moment go out and about on my own but can go shopping using a trolley with a kind escort to carry my parcels and bring me home. The fear of falling and then returning injured to Kingston Hospital is a great concern to me. Psychologically, I feel I have done well. It was so frightening at first that I really felt it would be a good thing if I didn’t survive – after all I was 82 and how awful this was going to be for the family, etc. However, I somehow hung on to my sanity and decided to completely switch off and not allow any weeping or questioning of why this might happen to me. Luckily, I very much like people and enjoy hearing about their lives. Also, I do have a good sense of humour so as I got better life became easier with some wonderful nurses and physios, all of whom were very proud of what they called ‘my splendid improvement’. I certainly have a different approach to life and as I have just had my 83rd birthday I intend to enjoy every moment of the rest of my life and worry as little as possible about anything. I was fortunate to go into this illness in a fairly fit state of health – enjoying walking and being independent. I think the relatives of people dealing with this illness need immediate reassurance and information so that they can provide encouragement and emotional support to the poor puzzled sufferer. Many nurses in general hospitals seemingly have never heard of GBS. My daughter laminated fact sheets and gave them copies! My son, Clive, lives in LA and my daughter, Lulu, a florist, is staying with me and is being truly wonderful with her support. Clive came over regularly when I was first ill and was equally splendid. We went back to Sussex last week to celebrate my 83rd birthday. I am very lucky. I have a sister who stays from time to time to give Lulu a break, and lots of great friends. I look forward to improving my walking but am told to expect things to move slowly. I have occasionally very slight tingling in my hands and they are a little stiff in the mornings but since I couldn’t use them at all for a long time, no complaints! I would so like my recovery story to be told – when I was very ill the oldest ‘good outcome’ story we could find was of a 68 year old man. At my age, I think my good progress can provide real hope to others. Perhaps I am one of the oldest survivors? Margaret Pearse, 25th April 2010

Sadly, Margaret passed away in October 2012 following an unrelated illness, but had always felt it might be encouraging for newly diagnosed elderly patients to read of someone having a successful recovery at the age of 82. Margaret’s son, Clive, has kindly shared her story with us, to mark what would have been his mum’s 90th birthday in April of this year. 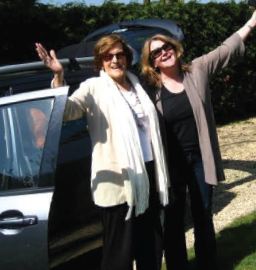