For many years it had been an ambition of mine to visit Russia, particularly St. Petersburg. In February 2010 when I had Guillain-Barre syndrome, and was completely paralysed, it looked as if it was something I would never achieve. 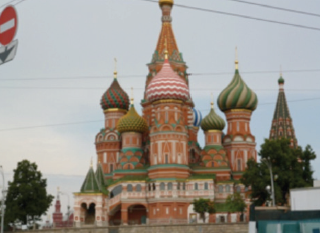 However, I was able to make a good recovery, and determined in the 2nd life I had been given to make the most of my opportunities. So when my husband retired at the end of 2012, we decided our big holiday would be a river cruise from Moscow to St. Petersburg.

After many months of waiting, and completing the long and laborious process of getting a visa, we eventually flew from Heathrow to Moscow on Saturday 6th July 2013. There was no problem getting through the official controls, and we soon arrived at the Peter the First cruise ship, where we were greeted by music and a lady offering bread and salt, a traditional welcome in Russia. We had deliberately chosen a small boat, one with only 100 passengers, as we did not want to be on a large crowded boat, as GBS has left me feeling uncomfortable with crowds, something many of you will sympathise with.

On Sunday 7th July we set off in the morning for a Moscow city tour. We visited Red Square, which the real meaning of is “Beautiful Square”. This was dominated by St. Basil’s Cathedral, which was very impressive with its brightly coloured onion domes. The next visit on the tour was Cathedral of Assumption, which although it looks older, they actually started building in 1930, but was not completed until 1990. Russian churches do not have pews like they do in English churches, so people have to stand and some of the church services can last for many hours. We were struck by how religious the people were. In the afternoon we saw the Bolshoi Theatre from the tour bus and then went on to visit the Kremlin. Kremlin means “fortress” and is in effect a walled city, which contains the government buildings and five cathedrals, the most important of which is the Dormition cathedral, which was completed in 1479 and is where the Russian tsars were crowned. Inside the Kremlin it was surprisingly green with lots of trees and flower gardens.

Monday 8th July started with a tour of the metro stations. the stations were a far cry from those in London, and a far more efficient transport system than London with trains running every minute and at 60km an hour (London’s is 40km per hour). Huge ornate chandeliers and paintings decorated the ceilings of the metro stations. The metro system was built by Stalin to display how wonderful life was under Communism. Very large bronze statues, porcelain figures and pictures depicted various areas of Russian life, beautiful healthy children, farmers with abundant crops, successful sportsman and people enjoying life. There was also an abundance of ceramic tiles and mosaics.

We asked Natasha our guide on the boat and the Moscow city tour guide (both of which were of an age to have lived under Communism), whether they thought it was better as it was then or now. They both thought that each of these times had good things about them, but on the whole they thought that Communist times were better because of the way that people were looked after with better education, job security and provision for the elderly. Coming from the west we would have expected them to say that democracy was far better, and so this came as a surprise to everyone.

In the afternoon we departed for Uglich. We had 1801km to travel to St. Petersburg (app.1125 miles) and 18 locks to go through. It gives you an idea of the immense size of Russia when you think this is just one small corner.

We sailed overnight and arrived in Uglich in the early hours of Tuesday 9th July. In Uglich we visited the Church of the Split Blood, which was where Dimitri the only living heir of Ivan the Terrible was murdered in 1951. Boris Godunov who seized power and made himself Tsar put about rumours that the death was caused by him having an epileptic fit while playing with a knife. The death of the Tsarevitch Dimitri ended the Rusvik dynasty, and the period known in Russia as the “Time of Troubles” began, with 3 False Dimitris trying to claim the throne. In Uglich we were entertained by a male voice choir. I was then able to try on a Russian costume; the picture shows me in this costume.

Later that day, as the ship set sail, we had our first Russian language lesson. We learnt some Russian words, sang Russian folk songs and learnt to dance the Kalinka. We also had a talk on safety measures, and had to put our lifebelts on.

We arrived in Yaroslavl on Wednesday 10th July; this town was founded in 1010 by Prince Yaroslavl, which makes it the oldest city on the Volga River. They have a flower display in the park which now reads 1003, the number is changed each year to display the years since the foundation of the city. We then visited a monastery, which had a shop with reasonably priced souvenirs. 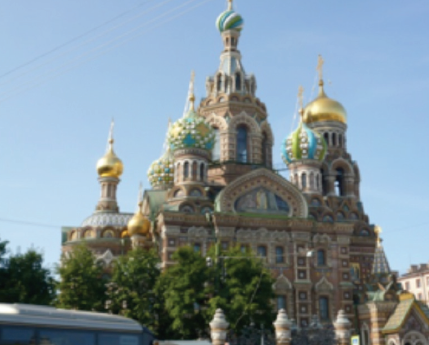 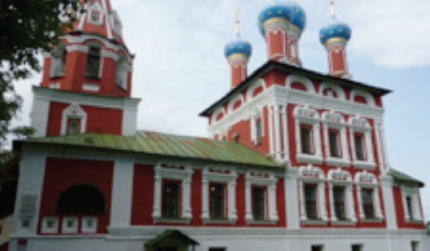 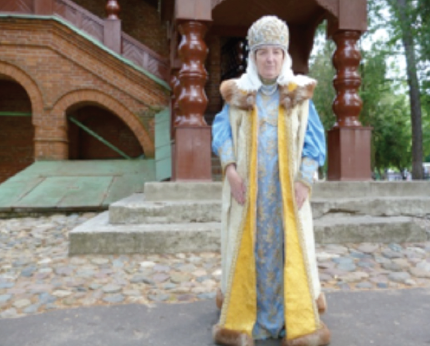 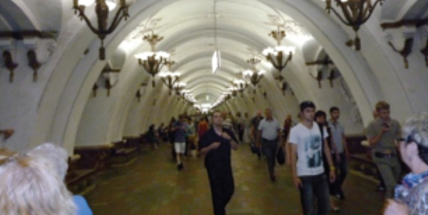 Later that day we had a talk on Russian cuisine. Our journey took us into the Rybinsk man-made sea and saw the Statue of the Mother Volga. When they flooded the area to make this sea, 31 people who chained themselves to their houses because they refused to leave were drowned. The day ended with our nightly concert.

When we woke up on the morning of Thursday 11th July we had docked in Kuzino. This was a very interesting place which remembered its Viking past. They had Viking longboats and a house with displays of Viking armour, helmets and a throne. We then went by coach to Kirillo to the Belozersky Monastery, where 250 monks lived in the 14th Century but there are now only 2.

On Friday 12th July, we journeyed through Lake Onega and the Baltic Canal, passing through 6 locks which Stalin had built by slave larbour. During the day we had a visit to Captains Bridge to see how they operated the ship. We didn’t arrive at our destination of Kizhi Island until six in the evening, so this visit was shorter than I would have liked. The Island of Kizhi is home to an outdoor museum of fascinating edifices of northern wooden architecture from various parts of the lake, churches, and farmsteads etc., also the remarkable Transfiguration Cathedral which is original 15th Century. The accepted version of the early beginnings of the island of Kizhi is that it was an ancient pagan ritual site for northern tribes. The 1714 Transfiguration Cathedral was erected on Kizhi to commemorate Russia’s Victory over Sweden. The Bolshevik government issued a conservation decree protecting the ancient wooden buildings.

On Saturday 13th July we sailed to Mandrogy on the banks of the Svir River. This is a tourist attraction village with craftsman’s workshops and a vodka museum. We crossed on a small hand operated ferry to an island which had a zoo with animals found in Russia. During our meeting in the lounge that day the guide told us various stupid questions that people had asked her, these included: 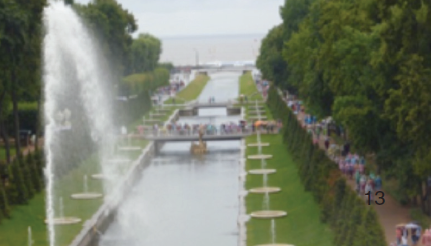 The evening we had the Captain’s Farewell dinner, for although we would be on the boat for another 3 days, the Russians who had been on the boat were leaving the next morning.

Sunday 14th July, we had passed over Lake Lagoda during the night and arrived in St Petersburg at seven in the morning. The lake freezes over in the winter. At nine o’clock we departed for a city tour of the fascinating St Petersburg; it has canals going all across the city, which earned it the title of “Venice of the North”. Our first stop was St Isaacs Cathedral, and then we visited the magnificent Church of the Spilled Blood. Our next stop was the Peter and Paul Fortress which houses the tomb of the Romanoff royal dynasty. We saw the bronze horseman statue (I would highly recommend The Bronze Horseman book by Paullina Simons) In the afternoon we visited the Hermitage, and saw paintings and statues by Da Vinvi, Michelangelo, Van Gogh and Picasso.

Monday 15th July started with a morning of leisure on the boat. In the afternoon we visited Pushkin (Catherine’s Palace). This was burnt down and completely destroyed by the Germans during the siege of Leningrad, which took place during the 2nd World War. The Hermitage is in the centre of St Petersburg, and stayed in Russian hands, so it remained relatively intact, but Catherine’s Palace is quite a distance away from the city in an area which was under the control of the Germans. The palace was restored to its original glory by the Soviet government, so that we can now appreciate it as it was. This palace gives us an idea of the opulent lifestyle which the Romanovs enjoyed.

We had an early start on Tuesday 16th July, so that we could visit Peterhof (Summer Palace). This also was destroyed by the Germans and had to be restored by the Russians. Although the house was magnificent, it was overshadowed by the gardens with its ornamental fountains, which was built by the Tsar who wanted it to be more magnificent than Versailles in France.

Wednesday 17th July, and sadly it is time to return home. Despite what you hear about Moscow and St Petersburg not being safe places to visit, we found it to be very clean, safe, and the people to be very friendly.