The week before this date, everything was normal. I was doing Spin classes at my local leisure centre and was over half way through my training for my run in the Great South Run and pleased with myself as I had managed ten miles! Visiting a couple of National Trust properties, along with my part time working hours in the Prison Service, everything was a normal type week. 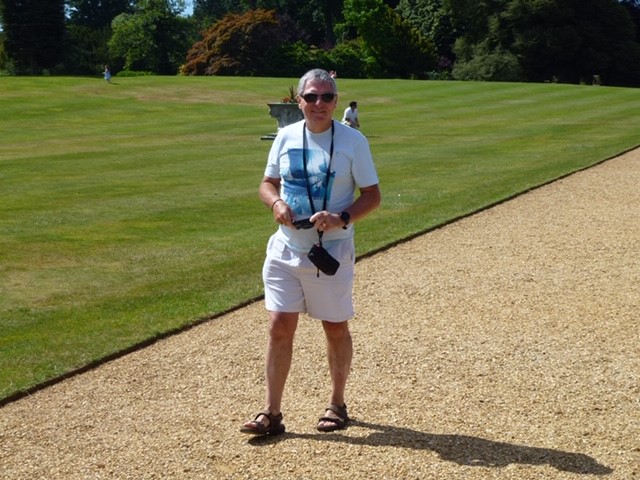 On the weekend before 25th, I went to work as per normal, but started to feel pain in my right leg which caused me to limp. I managed the 55-mile journey home and put it down to a sport injury …maybe those ten miles were just a little too much! I got up on 24thJune and headed back into work, but still had a slight limp…the pain felt just the same. I managed the 55-mile drive back into work, but as the day progressed the pain increased and my mobility started to rapidly deteriorate. So much so, that my colleagues were stepping in, to help out with some of my duties. The pain was now increasing and the limp was very pronounced to the point that I was dragging my right foot. Somehow, I managed to get to my car and set off for home.

Throughout the night, there was no relief from the pain but it did not increase further. Mental note to self…. ring the doctor in the morning.

On a Monday morning, trying to get an appointment with the GP is extremely difficult and I got turned down initially. However, my wife decided that I was going to see one! and she did “make it so” even though it was a sit and wait appointment.

This turned out to be the best piece of luck for me….as I had to see a locum. After a 40-minute wait, in I went ….40 minutes later, she had rang the hospital to admit me, with suspected GBS. She asked us to go straight to Queen Alexandra Hospital Portsmouth. Unbelievably, she had been recently studying GBS…what are the chances? However not understanding the severity of this condition, we went home for a cup of tea first!

I was to report to the Acute Medical unit in the first instance. I was expecting to have a quick examination and then be sent on my way…. i was soon made aware that I was going nowhere and that I was to have several tests. At this stage, the pain was quite intense in my right leg and mobility poor, but now my left leg was becoming immobile, although not too painful. At this stage I was issued with a walking frame.

Several general consultants performed reflex tests, pin prick tests, the normal pulse/temp’s tests, and eventually I saw my assigned Neurologist. I was treated with IVIG and after a short while I started to feel better and my mobility improved. I was sent home after a week. I felt like I was improving at home, but after 5 days the pain started to come back and the tingling and numbness started to gain in my right leg again. 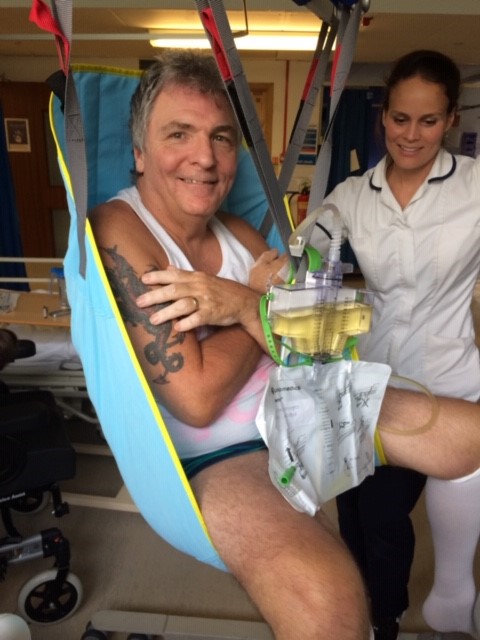 A call to the doctor, and they sent a nurse practitioner out to my home. She was there within 10 minutes and called for an ambulance to return me back to QA hospital. I was re-admitted and this time things started to speed up…the pain was increasing further and my mobility was decreasing very rapidly. It had now started to move further up my body. Tests now included Lumber punctures, Electromyography, bloods, and chest x-rays. A further 5-day treatment of Intravenous immunoglobulin and again, I started to improve slightly but 3 days after the treatment had finished, I went into full relapse. At this point, QA Hospital decided to move me to the main Neuro hospital down on the south coast…Southampton University Hospital.

Admitted to Southampton 14th July and by now, I could no longer walk, even with a frame. And so was provided with a wheelchair as long as I had chaperone nurses!

It was at this time that the tests increased greatly…bloods were taken regularly, lumbar punctures, more EMG’s, CT scans, MRI’s, no expense was spared, I had everything that they could throw at me. By now, my legs and torso and arms had become paralyzed. Spirometry tests were conducted every two hours, obviously now the concern was that it was now debilitating my breathing and affecting my lungs. 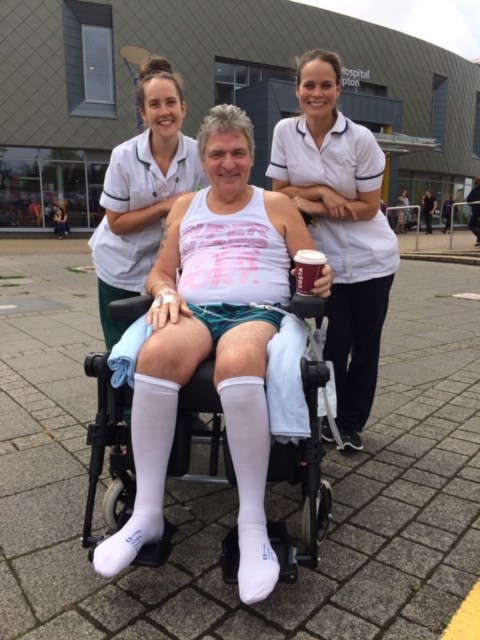 Admitted to Southampton 14th July and by now, I could no longer walk, even with a frame. And so was provided with a wheelchair as long as I had chaperone nurses!

It was at this time that the tests increased greatly…bloods were taken regularly, lumbar punctures, more EMG’s, CT scans, MRI’s, no expense was spared, I had everything that they could throw at me. By now, my legs and torso and arms had become paralyzed. Spirometry tests were conducted every two hours, obviously now the concern was that it was now debilitating my breathing and affecting my lungs.

I am now at the stage that I cannot move on or off the bed, and am now unable to feed myself or control my general body functions. At this stage I am not allowed to be moved from my bed, and had to be turned every two hours to prevent bed sores. I am catheterised as I am unable to urinate. I am beginning to become a conundrum to the doctors as they could not understand why the IVIg would work for a matter of days and then I would relapse, yet again and deteriorate further. They decided that the next course of action would be blood plasma exchange (plasmapheresis). This did not work either. Again, I relapsed further. I was lucky, in as much as I could still breath unaided but the numbness was starting to get deeper within my chest area. Up until this point, I had tried to be as positive as possible, which certainly helped, however now I felt like I was actually dying and asked the registrar if that was the case. By the way, I had built up a great relationship with this particular registrar and we could be brutally honest with each other, as that was what I asked for. Later he did tell me that at one point they were going to call the family in. 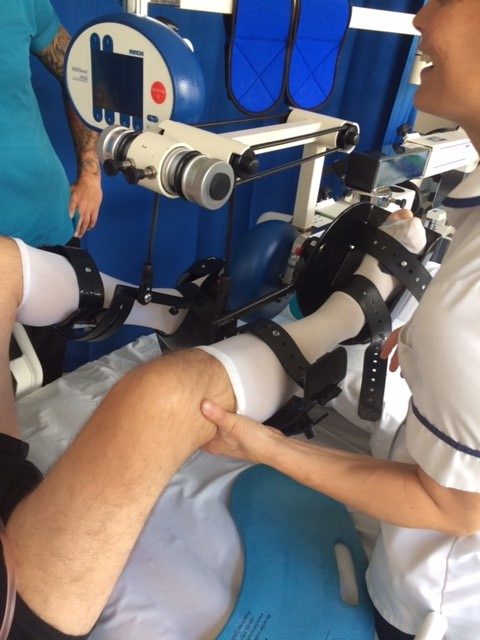 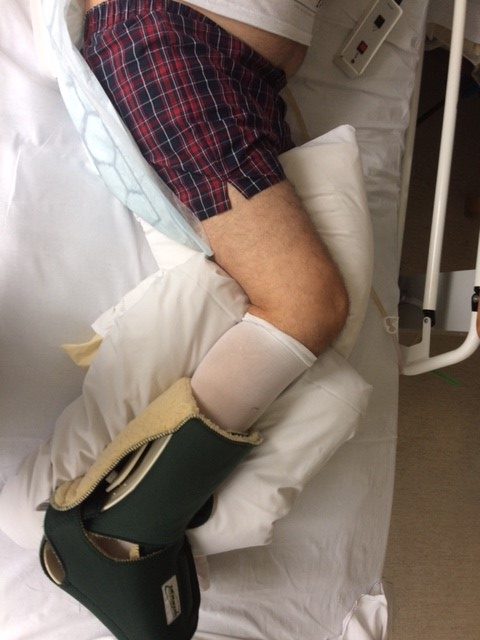 But I digress, and for now will condense my treatment ,instead of giving a  daily /weekly account…. I was given in total 6 IVIg courses, each course was 5 days. I was given 3 lots of blood plasma exchanges. The question was asked…. what next? what more could be done? It was then that they decided to throw everything at me….and for two weeks I was on an intravenous anti biotic (the strong kind), then blood plasma again and IVIg…..topped off with 60mg of steroids on a daily basis. Bloods were now being sent off to Porton Down. Throughout this, they informed me it was unlikely I would walk unaided again…. but I had news for them!!!

After this course of treatment…finally …. I started to improve without the usual relapsing. My Neuro Consultant told me that my condition was chronic and not acute and therefore CIDP and not GBS. Due to my constant relapsing. 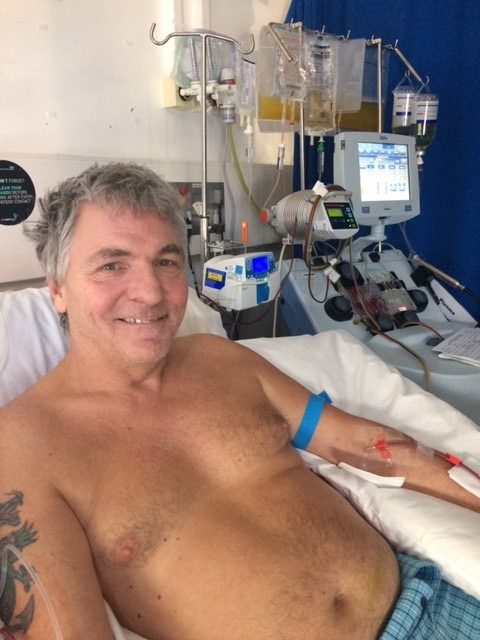 From here onwards, I made gradual improvements with the help of the most fantastic neuro physios. They put my feet in casts to help prevent foot drop, they used hoists, wheelchairs and even at the earlier stage with them, used to wheel my bed outside the main entrance for fresh air— it was really very hot last summer! I could write a book regarding what those incredible people done for me, but for now, I will just say that I had the best help that I could possibly have wished for.

I will say this, I am positive by nature but there were dark periods. I am human and they were intense but did not last long. I remember thinking that I was not going to survive this at one stage, and then on another occasion think…I will beat this, if it’s the last thing I do!

So…. after nearly 4 months in hospital and after learning to eat and feed myself again, get around using a wheelchair initially and then crutches, learning how to do simple things with my hands, I am delivered into the capable hands of the Neuro Physio unit back at QA hospital for two sessions in the Neuro gym on a rehabilitation program. What these people do is incredible. 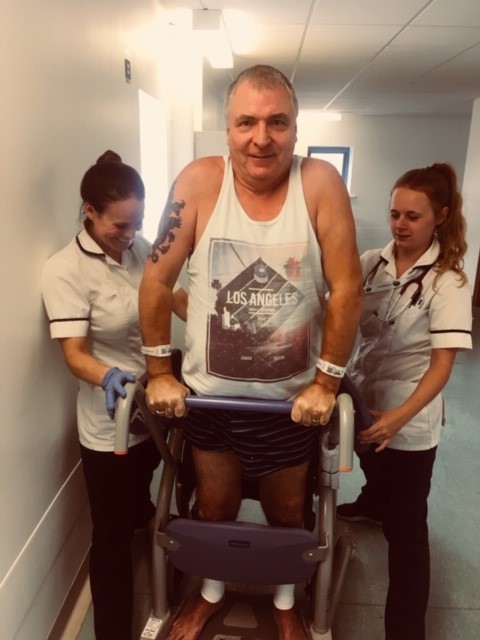 After twice a week hourly sessions for nine months , I have finally been discharged from Neuro physio.

I am on a reduction plan with regards my steroids, and have decreased my gabapentin down to next to none, from a total daily dose of 1200mg.

Now that’s the hospital part of my story. Of course, I could go on forever about all the things that happened in there. What I have not yet mentioned is the support I received from my family and friends, and what they went through too, but I will say this, I was lucky (if you can say that, ) and that was because one of my old working acquaintances was a recovering GBS patient and he found out that I had it too.

By sharing his story with me ,and seeing how well he looked ,I could see that you do get through it and that things will get back to near normal, eventually (hopefully). I was made aware that it was going to be a very long process though.

I still get pain at times, I get tired, am clumsy and forgetful but I push myself through all of this….and now, can declare that I am running, (albeit not as good as I was 18 months ago) and have just increased my running distance to  6 miles…. in preparation for the  Great South Run….and hopefully raise some much needed funds for GAIN. (I did not put CIDP on my story  as not many know of the chronic version…. including DVLA!)

At present, I find climbing stairs difficult and that is very odd, but my nerves in that area have probably been damaged. A nuisance really when I have to go up and down them on regular basis at work!

I have not been discharged from my two neuro consultants …they are being extremely cautious with me, as we are not sure when my next relapse may happen. It could be months, or a year and it could be significant or not, that’s the unpredictable side of this illness.

Before I finish I just want to mention that I did assist with a research at Leicester University and that I will always go and speak to anyone in the local hospitals if asked to…. the scary part of GBS /CIDP is …no one has ever heard of it ,let alone know what it does, how it happens etc…what I do know though ,is that it really does help to spread the word about it, to inform as many people as you can…and to let those who contract it, know that there really can be light at the end of the tunnel. 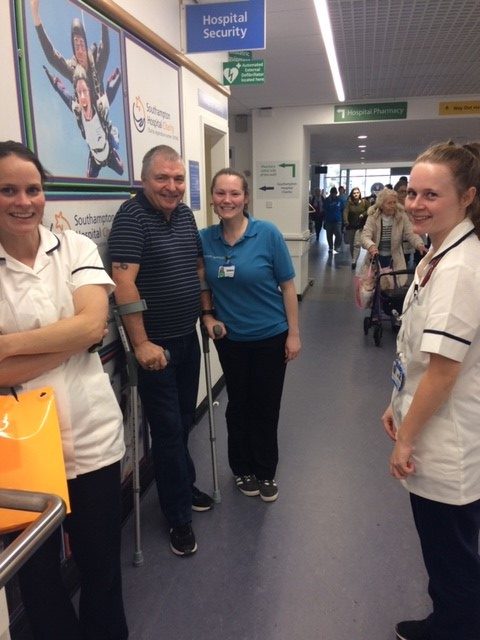