This is my story so far.

It all started Saturday 16 June 2018. I awoke with a slight weakness in my left hand. I did not think too much about it as for about 10 days or so previous I’d had a stinker of a cold and assumed the weakness was related. The weakness had got gradually worse throughout the day. At about 6pm my wife and I took our dog to the beach for a run so all was well.

I woke at about 0730 on Sunday 17 June, Father’s Day, I was to attend a charity motorcycle ride. I walked into the lounge and my legs gave way, I fell to the floor. I struggled to get up. My wife urged me to call NHS Direct. After about 15/20 minutes of answering questions I was directed to my local surgery out of hours number. They called an ambulance for me.

The ambulance arrived and with the assistance of the crew I managed to walk to their vehicle. They took me directly to A&E.

Various doctors asked questions and carried out tests throughout the day. At about 6pm two doctors asked to see me walk, with their assistance I managed a few steps, my feet and legs felt clumsy. I thought I was walking like a thunderbirds puppet. Little did I know this would be my last walk for some time.

That night I had two lumber puncture tests. I hate needles at the best of times. Monday 18th June, I woke up and was barely able to move. By lunchtime I was paralysed and unable to move arms and legs at all. I was terrified. More tests and lots of baffled looks from the doctors.

I think it was the Tuesday when I was told it was GBS. I had never heard of it before but at least I had a name for what was wrong with me.

Later that day or possibly Wednesday, time seemed a bit insignificant really, they started me on IVIg. This lasted for five days. None of my doctors or nurses had experienced GBS before so could not tell me much.

Sometime in the next few days I saw a specialist who was able to give me a more detailed explanation of what was wrong with me. Apparently, it was the cold I’d had that lead to GBS. I could barely take it in and even now cannot really believe what has happened.

The consultant told me I was to be transferred to a specialist neurological unit In Liverpool once a bed was available. About two weeks after first coming into hospital I was transferred to the Walton in Liverpool.

Unfortunately, my wife does not drive so was unable to get from our home in N Wales to Liverpool to visit me but hey I was in a specialist unit so my recovery would be quicker or so I thought.

I had no specialist treatment, all I received was a little physio care. I told my consultant that I thought it a waste of time being there. Surprisingly he agreed and I was transferred back to Bangor, at least I could see my wife daily.

I was told that as soon as a bed becomes available, I would be moved again, this time to a rehabilitation unit. On 20th July I was moved to Penrhos Stanly in Holyhead. It was a bit of a trek for my wife but at least here I was to get proper rehab care.

Movement was slowly returning to my arms and hands and was improving every week. Despite getting stronger and getting regular physio sessions, daily visits from my wife and visits from friends, the nursing staff noticed my mood was dropping, hey I was still terrified and would cry myself to sleep most nights not knowing if I would ever walk again. After some discussion it was decided that with the right care plan in place I could return home. A provisional date of 2nd October was set.

Thankfully the care plan was in place, I was to have 4 carers 4 times a day as I was still unable to take care of personal hygiene or dress myself. I was however by now able to feed myself for the first time since Mid-June.

On the second of October I returned home. The first obstacle encountered. I was in a wheelchair and the ambulance crew had to lift me and the chair up the 2 steps to out the front door and then over the threshold. They then informed me they would not be able to get me in or out of the house again until a ramp was built. Luckily this was in hand and we were awaiting funding which was agreed and a week later a ramp was built.

The second obstacle was the care staff. We have thick carpets in the lounge which now houses my hospital bed and a hoist. The care staff claimed they struggled to move the hoist. It was agreed that rather than a portable hoist a gantry hoist would be installed.

The next obstacle was transport to hospital for my physio appointments. I was to have 12 sessions at a hospital in Caernarfon but due to unavailability of transport only received about half of these.

I have now been home for ten weeks and am now so much stronger. I still have carers for dressing and washing etc. I have an electric wheelchair which was funded by GAIN. I have just started a new course of physio for my upper limbs and I’m getting once a week physio for my legs at home. 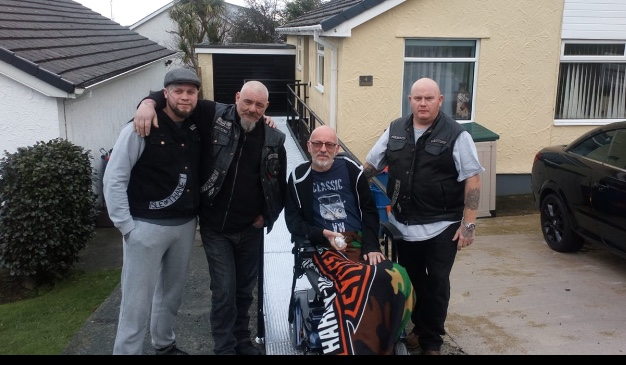 Light at the end of the tunnel

I’m still terrified as no one knows for sure how much of a recovery I will make. There is however a bit of light at the end of the tunnel. Since June despite getting movement back in my arms and legs I have had no independent movement of my feet. Last week I was able to move my toes, not much but movement is movement. If I keep on like this I will soon be back to work.

My advice for anyone who suddenly finds themselves in this position is do not give up. It is a long and slow process, but you will recover.

Six months on from when this all started, I would like to take this opportunity to say thank you to my wife and family for all their support, to my brother and his mates for the charity night they held to raise funds for my exercise machine etc and to my friends for their visits. I would not have come through this without such good support. Thank you too to all the nurses and care staff that have looked after me since June.