In 2013, Rachael Watson, a long-distance member of the GAIN Facebook Community, was struck down with Guillain-Barré syndrome, leaving her paralysed and needing assistance with all aspects of her life. Three years later, she took gold for Australia in her Paralympic debut in the S4 50m Freestyle.

It’s 1:00am in Rio on Sunday morning 18/9/16. I’m absolutely exhausted but buzzing with overwhelming joy. Apologies that this is a long post but I’m a bit emotional and it hasn’t really sunk in yet.

Day 10. Last day of competition. 17/9/16. Main event. 50m freestyle. Paralympic record. First Australian to win gold in my classification. I’m speechless! First drug test also! Can’t believe I lost it during my interview. I just couldn’t stop crying. FYI, I can’t see the score board clearly without my glasses so it means I’m unable to react until someone tells me what position I’ve come.

Nearly 3 years ago my whole life changed. I was able to walk well, drive a regular car, work as a learn-to-swim and squad teacher and was about to enter my final year of university and then move out of home to live independently with friends and start my career and save up to travel the world. I went from being independent to needing assistance with the most basic tasks as this condition has affected my whole body. What made it harder was the fact that I had spent my whole life growing up with a disability becoming functional courtesy of years of surgeries and therapy, only to have to start from scratch. I never would have thought that I’d be representing Australia at the paralympics especially as I was literally relearning how to float and blow bubbles and paddle with my life jacket on. I watched my video that I made 10 months ago about myself at physio with the wonderful team at Making Strides to mark 2 years on. I cried so much because I’ve come such a long way. 18 months ago I started training with my coach. Thank you Rob and Chandler Swim Club for putting in so much effort.

2016 has been a huge year as it saw me compete in my first nationals, first international meet and first paralympics. My aspiration for Rio was to really enjoy the moment and try not become overwhelmed by the emotion or become distracted by the audience, lights, cameras, and just make the most of it.

Just to be there on the team in Rio is an amazing achievement. I started off my paralympic campaign with the relay, achieved two fantastic personal best times in events that I don’t have much experience in and then won a medal in my main event. However if you don’t win a medal that does not mean that you were unsuccessful as a paralympian.

Not every event that I compete in was at the games but to have qualified a few months ago for 4 out of 5 events offered is pretty amazing I think. You can’t take any comfort in knowing the competitors’ qualifying times because everyone is so fast in the heats, even faster in the finals and they have years of experience over me. I can’t see the score board without my glasses so it means I can’t react until someone tells me what position I came. Well, tonight I enjoyed Mexican and Italian for dinner! Thank you so much Miranda and Trimi for challenging me. It was great to meet you both and congratulations on making the podium.

There are so many people who are very special to me but thank you to everyone who attempted to watch the coverage by staying up late and getting up early. Thank you all for your messages of support. Those words are very meaningful. Thank you to all the staff and my teammates who have made this journey so special. Special thanks to my parents, my mum and dad; my home coach, Rob, for believing in me when I first met you 18 months ago; my coach for the games, Yuriy, for training me one-on-one and to the physio Brett for spending a lot of time each day to help get me as pain free as possible and all loosened up. Thank you also to my wonderful helper Jennie and also the team doctor Caron for helping me get through each day.

To the people who have told me I’m an inspiration, well, I don’t know why you’d pick me because I’m just an ordinary person but thank you for your kind words. The question I get asked the most is “how do I cope with having a disability?” There’s so many ways to answer this but here goes:

I’m stubborn because when you’re a premmie, you have to be, you just have to.

I don’t want sympathy. I want to experience the same opportunities everyone else without a disability gets. I’ve never been on antidepressants but in no way am I calling you weak if you take them. Of course I’ve had my days where I hated the whole situation but I’m not one to give up. So I just take it one day at a time because it’s so hard to plan for the future.

I also manage by not overdoing it because I experience a lot of fatigue. In saying this, it is still extremely important to move around despite the pain and try to increase your endurance, rest when needed but still move around to prevent getting too tight or stiff.

Find a hobby that acts as a form of therapy to improve function because if you’re having fun then it won’t feel so rigorous, such as playing the piano which doubles up as a form of occupational therapy. Spend the hours practicing by yourself because any activity is expensive but it doesn’t mean you can’t do it.

You just have to get creative as to how to achieve it in your living room with minimal resources and money. Practice what you can of the physio exercises and stretches. Do the next page of the homework even though you don’t have to yet. There’s a lot you can do by yourself. Practice doing that because it will teach you good habits.

It’s easy to do but don’t compare yourself to others and don’t allow others to do it either because despite there being a lot of similarities between conditions there are also lots of differences! It’s all about finding that balance, yet understanding that it is something that will consistently need to be tweaked.

You have to keep positive, yet realistic and realise that it’s still ok to cry because you’re going to have moments where it just gets to you. You have to remember that you’re only human but in saying so, remember that you are in fact a person who should have the opportunity to participate in life as best they can so if you have to push for that, then do it, but do it nicely.

You have to have that special person who reminds you every so often that you really are someone worthwhile because there’s going to be moments when you doubt yourself. You have to learn to respect others’ opinions even if you don’t agree with it. You have to remember that quite often people only see or hear about the end result, they don’t see the rest of the process that goes into it including the effect something has on your body following those few seconds or minutes of complete maximal effort.

To anyone who is dealing with a recent diagnosis or still going through the diagnostic stage, I won’t sugar-coat it; it’s tough, really, really tough. Results will come back with no answers and people will question you and give up on you. There will be that one that really helps and what a godsend that is.

There will be more bad days than good days at the beginning, and it doesn’t matter what anyone tells you, you’ll feel like they don’t understand and that things won’t get easier. I can tell you, some of those people truly get it and it does get easier, not necessarily because the situation gets easier, although that certainly helps, but because you get stronger, although you might not feel like it.

Just take it one day at a time, or less if you need, hour by hour, but hang in there, because there will be really special moments, that the rest of the world just won’t understand, and that’s what will remind you of why you’re giving this everything you’ve got.

I might be a turtle on land but I’m a dolphin in the water! 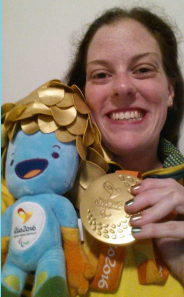