In November 2011 I gave birth to a beautiful boy. It was a C-section delivery but as a fit 31 year-old woman I recovered quickly and had a very active and fun maternity leave. I was also training for the Great North Run the following September.

On 1st September 2012 I went for my final long training run before the race. I noticed some slight tingling in my feet afterwards but thought nothing of it. The next day I felt like I was coming down with a cold and had a really sore back and neck. One day later I was having trouble walking straight and could no longer climb the stairs.

I went to my doctor who referred me to a neurologist. I was extremely lucky to see the experienced neurologist that I did. He had seen several cases of GBS before and could diagnose me immediately. The most important thing he said to me was this “This could get worse, it could get much worse so that you can’t breathe anymore, but always remember it will get better again”.

The next day I couldn’t get out of bed anymore so my husband had no choice but to take me to the hospital. At the hospital they were very nice but completely clueless about how to treat a patient with GBS. One mistake they made was that they didn’t realise the weakness and paralysis was progressive, so they would wheel me up to the lunch table and not understand that I could no longer lift my fork. Or they would help me up to go to the bathroom and not realise that I could no longer stand on my own and I would fall to the floor. Even the senior neurologist dropped me on the floor when he was helping me back into the wheelchair after my EMG exam.

But the biggest mistake they made was that they didn’t monitor my breathing correctly. And I didn’t let them know that it was getting harder and harder to cough and keep my throat clear. After two weeks in the hospital, they decided to transfer me to a rehab facility to start my recovery.

Unfortunately, as soon as I got there, I had a respiratory crisis and had to be sent straight back to the hospital, this time to the ICU. My breathing got so bad that they had to intubate me and the perform a tracheostomy. When I came round after two days I could no longer move my legs at all and was basically paralysed from the mouth down.

I remained this way for two weeks, only being able to communicate with the nurses and my family by blinking as they spelled out words on a board. I wasn’t able to communicate the intense pain I felt the entire time. I was given IV morphine every hour and I spent most of the second half of each hour counting down the minutes until my next dose. I also had no way of calling for help, as I couldn’t push the call button. One night my arm fell off the bed and I lay there for an hour screaming in silence until the nurse who came to check on me noticed.

During this time those words from the neurologist came back to me over and over again and always gave me strength.
I was treated with two courses of IVIg and gradually as the days passed  I started to regain some movement. First I could move my hands and lift my arms and then start to smile and move my mouth. I was taken off the respirator and able to breathe on my own again and talk again. 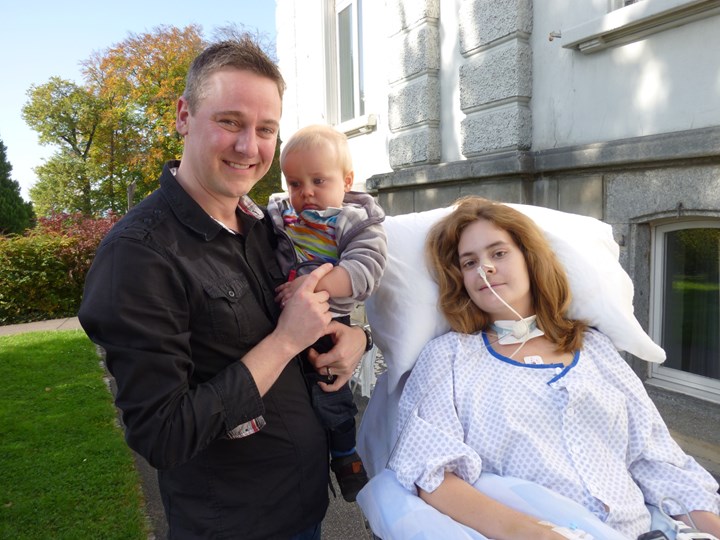 Then I was able to sit up with support for short periods of time. With every new movement came more intense pain. As the nerves started to regenerate I felt like my whole body was on fire, and my muscles had seized up from disuse.

My husband visited me twice a day every day that I received regular physiotherapy as well as the acupunture treatment. I continued to improve and after five weeks I was able to get around in the wheelchair on my own and transfer in and out of bed.

During this time my son celebrated his first birthday. We had a small party in my room at the rehab centre with a few friends. It was the first time people had seen me since my illness and I could see the shock on their faces at the state I was in.

I was then transferred to a second rehab facility where I stayed another four weeks. I made steady progress and by Christmas I was allowed home for a few days. Being home really brought back to me what I was missing out on and shortly after the New Year began, I asked to continue my treatment as an outpatient so I could be with my family.

Physically I made an almost full recovery in a little over a year. Although I still had problems with fatigue for a while after that. Now coming up to six years post GBS I can run and jump and two years ago I had a second child with a complication free pregnancy. I still have numb patches on my feet and they are very sensitive to cold and rough surfaces. My EMG results are still too poor to measure, but I am finally ready to tackle the challenge of the Great North Run in September 2018.

I feel very blessed. Not to have had GBS, but to have the knowledge and awareness that comes from having been in that position. ANd for the wonderful staff that looked after me. But most of all for my wonderful friends and family who supported me every step of the way.

I would like to raise money for GAIN in order to help raise awareness of GBS and improve diagnosis and treatment. Also to provide support for families whose loved ones are affected. 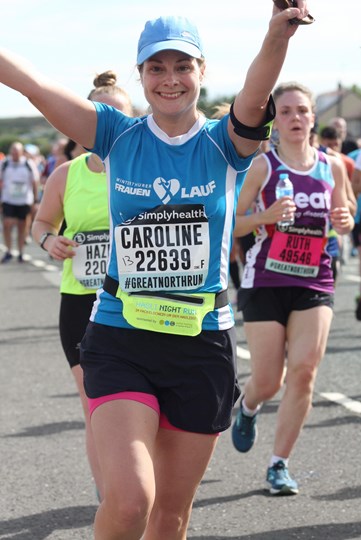 Caroline was as good as her word, raising £2185.13 plus Gift Aid for GAIN by completing the Great North Run in September 2018.