Tony Wyatt- My experiences of GBS

On awaking on 31st October 2012, getting out of bed I said to my wife, “there is something wrong with my fingers.” They felt heavy. Pam (my wife) called 111, an ambulance car with paramedics, who examined me but could find nothing wrong, so they left. I had a job to walk downstairs because my left leg started to drag so we decided to call the doctor. He examined me and by this time my arms felt like lead, and were beginning to drop. He took me to hospital in his car, and that’s the last I remember until I woke up in ITU on a life support machine. 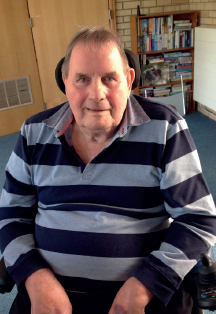 On awaking, I could not move or speak which made life very difficult. I was diagnosed with relatively unheard of Guillain-Barre syndrome and after a month, was moved to the high dependency ward. I was back and forth from different wards as I had pneumonia twice. I was due to go for rehabilitation but on the morning I woke with a chest pain and it turned out I had pneumonia again. So, instead of going to rehabilitation, I had to go to a chest ward for about 3 months, before moving to rehab where I started to get limited physio. I did manage to stand up in parallel bars and I went on the bike for a very limited time. Then I was discharged home in June 2013, still virtually paralysed from the shoulders down.

From there, I had limited physio. I had one hour a week, where the physio’s were brilliant as they got me standing and walking with a frame.

I was admitted to an intensive neurological rehabilitation centre in March 2015, where I have had intensive physio and occupational therapy to get where I am now. I can walk very well and they are working on my arms because I still cannot feed myself. Had I been admitted earlier on in my recovery, I think I might have been in an even better position than I am now. I should be being discharged at the beginning of June, with a better outlook on life.

Thanks to everyone for their help and putting up with a miserable sod like me.