Four years ago, on 1 September 2011, I was admitted into the intensive care unit at a hospital in Florida, unable to walk or feel my legs, arms and face, I had no clue what was wrong with me and was totally terrified. At first the doctors thought I’d had a stroke but after many lumbar punctures, MRI scans, blood tests and CT scans I was diagnosed with a rare illness called Guillain- Barre syndrome.

I spent two weeks paralysed from the neck down in the hospital, under the care of five doctors, barely able to move and in constant and extreme pain which was kept under control with morphine. On two separate occasions during that time my heart stopped and I honestly thought I was going to die, it was quite literally touch and go whether I was intubated and put on a ventilator as my body was unable to breathe without support. Thankfully after eight of a total ten plasmapheris treatments I turned a corner and started to get stronger, after fifteen days I was able to walk with the support of a nurse and a Zimmer frame.

I was then flown on an air ambulance back to Wales where I spent a further four months in a neuro rehab ward learning to walk, dress, wash, feed myself and write at the age of 31. I was only able to walk a few steps with the aid of crutches but found I was so weak I had to use a wheelchair for eight months and continued to walk with crutches and then a walking stick for another year after that.

My recovery was frustratingly and painfully slow with nothing I could do except wait for my nerves to regrow and hopefully return feeling to my feet and hands so I could walk again and just be the person I was.

Today you may look at me and think I’ve fully recovered but those close t me will know that I deal with the residuals of this horrible illness on a daily basis, chronic fatigue, unexplained pains, muscle weakness and dysaesthesia. 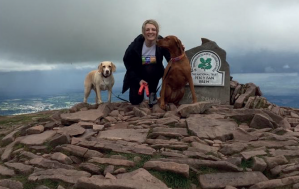