My story starts on New Year’s Eve 2011/2012. Since before Christmas, I had a persistent head cold and I didn’t seem to be able to shake it. On this particular Saturday (31st), I had been feeling unwell; feeling that I wanted to topple over. My wife, Mary and I went to bed, quite early for a New Year’s Eve but, after a while, I felt worse and we decided to call for a paramedic. Two came and checked my heart and said that they didn’t think anything was seriously wrong but took me to accident and emergency at Worcester Royal Hospital as a precaution.

Whilst there, I was seen by various medics over seven hours and part of one examination was trying to get me to walk in a straight line; without success. I was becoming less coordinated and weaker all the while. Finally, I was admitted to a ward and my wife and eldest son, Simon, returned home to rest. This was to be the last time I remember seeing them for two months even though they visited the next day and I was conscious. My vision was deteriorating and my memory fading so I cannot remember their visits. That day, unbeknown to me and whilst on the ward, I started to cough but could not clear my chest. This made me panic and the last I remember was the nurse saying that the doctor was on his way. This, I was later told was the paralysis starting.

I was given a breathing tube but, by this point, I was losing consciousness and rushed up to the HDU (High Dependency Unit). On the way there, my breathing stopped and one quick-thinking medic decided to pull out the breathing tube which allowed me a sudden rush of air and probably saved my life at this point. I was redirected to the intensive care unit.

For the next two months, I was in intensive care with the main problem being that the medics didn’t really know what was wrong with me but were treating me for a stroke. I had been put into an induced coma initially but after this was stopped, I failed to wake up on my own and my family were told to prepare for the worst. On a couple of occasions it became so serious that my family were asked for permission to turn off the life support. This was refused with my daughter, Denise, particularly adamant that this was not to happen. Obviously, I owe my life to them. 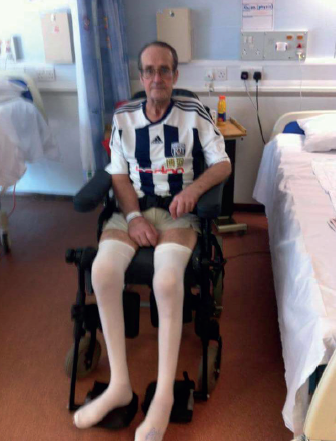 Beginning my journey at Moseley Hall

Then, one day, a nurse who, expressing that she had seen something like this before, pointed out a gentlemen visiting the ward, She told my younger son, Daniel, to go and have a word with him and to mention Guillain-Barré syndrome. The gentlemen turned out to be a visiting medic from the Queen Elizabeth Hospital in Birmingham. He came over to my bed, examined my comatose state and said that he thought I had Miller Fisher syndrome (a variant of GBS) and that I was probably on the mend. Yet another person for whom I owe my life. From then on, things gradually started to improve; but it was to be a very slow process.

The next people I am extremely indebted to were the physiotherapists, especially one called Louise who had been treating me from my admittance. As I started to come around, the physios were able to treat me more thoroughly until I eventually started going to the hospital gym. One of the physios, I am ashamed to say that I no longer remember her name, told me that I would probably walk again, “you can usually tell!” she said. This cheered me up and gave me added determination. Again, I must thank Louise and the other physios for looking after me and for giving me hope.

Whilst all this was going on, whether it was the morphine or from simply going stir-crazy, I was having tremendous dreams and nightmares which seemed very real. They drifted across sleep into waking so that I became confused and anxious. The nurses simply took it in their stride and coped with my ramblings.

After a while, things started to improve, although getting used to the hoist proved difficult. I had my tracheotomy tube removed and was able to speak on my own for the first time in about three months. This surprised my wife when she visited as I just started chatting to her in a slow croak. Eventually, I was moved out of the intensive care to a regular ward and all the staff came to wave me off. I was only moving about fifty yards; talk about “Mr Popular!”

All the while, I continued my physio which was becoming more strenuous but I was pleased that progress was being made. Then came the day when I was told that I was being transferred to Moseley Hall Rehabilitation Hospital and would be leaving almost immediately. After an emotional farewell to Louise and her staff, I was off.

Moseley Hall was a different sort of hospital. The priority for me was to hopefully manage to walk again. In this, I was helped by another wonderful physio, Rhianne and by a wonderful occupational therapist, Gayle. Here, my physiotherapy started with a vengeance with many one-to-one sessions. The only problem was that the hospital was further for my family to get to although my wife rarely missed a visit and other members of my family came regularly. Two of my wife’s sisters came every Tuesday and you could usually hear them before you saw them but they had everyone in stitches (no pun intended!).

We had regular progress meetings with the Doctor, the nurses, physios and my family; which helped. Building my strength, straightening my foot which had curved to a 45 degree angle, learning to write again. But then came another significant day. Rhianne told me, after what I thought was the end of a gym session, that I was going to walk now. Absolutely gobsmacked! But we did it; with Rhianne on one side and another physio on the other. I was so pleased. From then on, things improved quite dramatically.

The rehab ward was a place where people came to get better, not die. This adds significant strength to your motivation. It was an easy-going place in lots of ways but there were some sad cases. The patient in the next bed was a 30 year old dentist, recently married who had a stroke and finished up with Locked-in syndrome. He was very poorly but I believe that he has improved so much that he has written a book on his fight to get better.

Soon, Gayle the OT told me that I would be able to go home for a visit and assess how I coped. She also arranged for minor conversions to the house so that they could fit a bed downstairs in the dining room. Walking through my own front door first time in seven months – what a feeling! I was soon transferred to Bromsgrove Hospital for a couple of weeks, until I was ready to move home permanently. Unfortunately, after showing off to my grandchildren (who had kept me going throughout the whole process) I fell and stayed in hospital for an additional two days.

I have lots of people to thank for my recovery: my family, all the hospital staff, friends. Reading the cards from well-wishers my wife had kept leaves me totally overwhelmed and tearful. I am hoping to do a walk between hospitals to raise money for charity and I am amazed that this is even a possibility from where I was at the start of 2012. 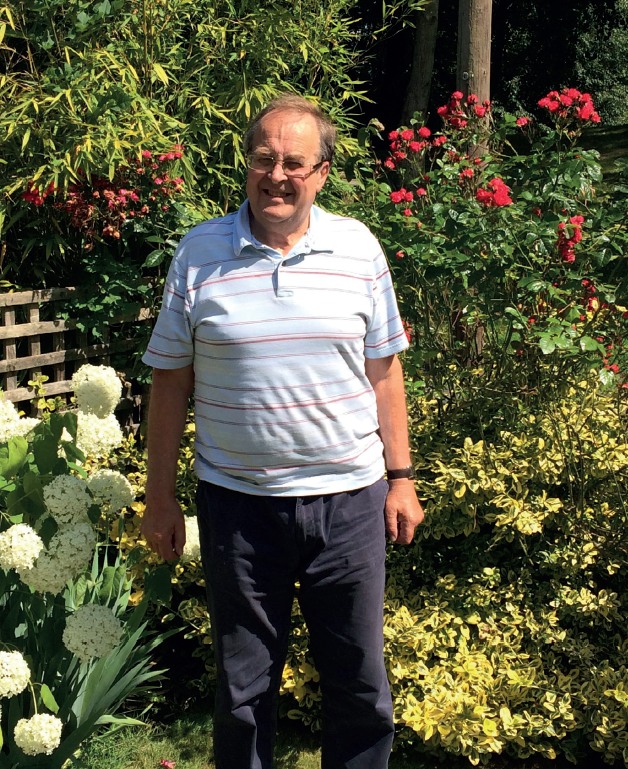